Samuels Jewelers was originally founded as Barry's Jewelers in 1956. Started by David Blum and Gerson Fox in Los Angeles, California, the company started out as a single store which within a few years grew into a small, regional chain. Barry's Jewelers continued to flourish throughout the next several years, with stores concentrated primarily in southern California. Blum and Fox focused on offering their customers good service with a high-quality inventory at prices competitive to other chains. At the time, chain jewelry stores were just beginning to make a mark within the industry, and Barry's Jewelers soon grew to regional prominence in the western area of the country, opening dozens of stores within two decades.

Beginning in 1982 Barry's Jewelers began to take advantage of an economic climate of looser credit standards and consumers who were spending more freely. In part due to the rapid expansion of indoor shopping malls in the 1980s Barry's Jewelers became one of the fastest-growing jewelry chains in the country. The company opened several new stores of its own, and also acquired two other jewelry chains, Mission Jewelers and Samuels Jewelers. Barry's Jewelers bought Mission Jewelers from Zale Corporation, and in doing so added 60 new locations to the company's roster, as well as expanded the company geographically, with the Mission Jewelers stores being centered primarily in the Southwest. The acquisition of Samuels Jewelers, which was purchased by Barry's from the Canadian company Peoples Jewelers, was also a boon for the company, as Samuels was a well-respected, if small chain which had been in operation in the western regions of the country since 1891.

In 1986 Barry's Jewelers went public, and between that year and the next grew to 104 stores, becoming one of the fastest expanding jewelry chains in the country. Within a period of eight years the company had expanded from 54 to a total of 228 stores, the vast majority of which were located within malls, and had acquired a number of small but fiscally healthy chains. By 1990 Barry's Jewelers counted among its divisions not only Samuels Jewelers and Mission Jewelers, which were the company's two strongest acquisitions, but also the stores Gold Art Creations, Hatfield Jewelers, which operated out of Los Angeles, A. Hirsch & Son, Schubach, and Ringmaker. All the stores specialized primarily in precious gemstones, watches, and gold jewelry, but inventory also varied slightly from chain to chain, with certain stores focusing more on modern, fashion-conscious jewelry while others emphasized a more classic image. Barry's Jewelers' divisions, in other words, were not operated as if a single entity, with a centralized system of control: each division had its own management, marketing, and accounting team, which helped the divisions maintain a unique identity. Having the company's divisions maintain such independence, however, proved to be disadvantageous to the company in the long run. 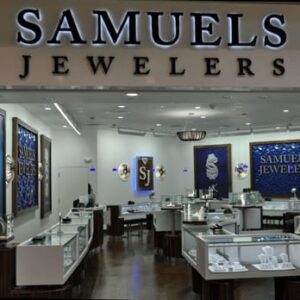 A vitally important part of Barry's Jewelers' rapid growth was due in part not only to a retail economy conducive to the expansion of chain stores, but to the company's own willingness to extend in-house credit to customers who had little or no credit history. Flexible credit became an essential element to Barry's Jewelers' customer service, and allowed a customer who would otherwise be unable to afford pieces in a certain price range to have access to that merchandise through credit. Such methods of purchase were of course a risk, both for the company and to the customer's financial well-being, but the practice ensured the company a larger customer base and, perhaps most importantly for a store trying to survive within the highly competitive jewelry market, also virtually guaranteed loyal, repeat customers. By decade's end, when Barry's Jewelers had reached its peak point of expansion, credit accounted for almost 72 percent of the company's sales in all its divisions.

After almost a decade of phenomenally successful growth and acquisitions, Barry's Jewelers in 1990 began to be troubled by financial threats on several fronts. The company's growth had stretched its overhead to the limit, and, with so much of the company's sales coming from consumer credit, Barry's Jewelers found itself in a vulnerable position, overly dependent on the fulfillment of debt from customers with shaky or nonexistent history. The company began to have increasing difficulty paying its many vendors and, with rumors circulating about the business's instability, weakened investor confidence caused the company's stock to fall from a high of $9 a share to $1.50 a share.

As a brief recession set in at the beginning of the decade, many of Barry's Jewelers' customers who had utilized the company's in-house credit were unable to pay back their debts, and had to default on their bills. Had the company not relied so heavily on credit, these defaults probably would not have made much more than a dent in the business's financial well-being. Additionally, in 1991 Barry's Jewelers had a devastating holiday season, which was by far the most important selling period for a jewelry business, and the company fell far short of its targeted Christmas and Hanukkah revenue predictions. By the end of the year Barry's Jewelers had losses of over $29 million, bringing into question the company's future viability.

Besides facing bad consumer debt and increasingly poor sales, Barry's Jewelers had a new, unforeseen competitor in the early 1990s: home shopping networks. Home shopping networks were a threat to the more traditional retail industry for several reasons, the two most important of which were price and convenience. Because labels did not have to showcase their merchandise in actual retail space, overhead costs were much lower for home shopping merchants than other retailers, allowing the former to keep prices far lower than those of their competitors'. In addition, with products being sold on television, the consumer did not have to plan a specific trip to make a purchase; it was all right there in the customer's own home, making both impulse and planned purchasing easier.

In February 1992, after a further loss in overall sales, Barry's Jewelers began planning a financial restructuring caused, according to the company, by "a depressed retail market and deterioration in its (the company's) financial condition." The company filed for Chapter 11 bankruptcy protection, and worked out a plan with its investors under which the business's vendors would continue to be paid while the company plotted a new financial strategy. While most businesses remain under Chapter 11 for at least half a year, Barry's Jewelers was able to emerge after only four months, and by June was operating on its own again.

The restructuring resulted in several changes, with the company's bondholders receiving financial and managerial control of the business. The company was also able to obtain a $103 million line of credit which allowed continuing payments to vendors, thereby keeping inventory well stocked and up to date throughout the restructuring process.

Though Barry's Jewelers came out of Chapter 11 in a short period of time, the company was forced to downsize, and closed 68 of its poorest selling stores. The stores were sold to small regional chains and independent jewelers at a fraction of their actual worth, but the sales were necessary to both meet the company's debts and aid in the maintenance of Barry's Jewelers' more lucrative locations.

One of the more important alterations which came about as a result of Barry's Jewelers financial difficulties was not fiscal but structural: the company after 1992 made significant moves towards centralizing their financial and managerial operations, with the aim of making the company's divisions more unified and less heterogeneous in both presentation and style of management. The company changed its policies of allowing each of its divisions to autonomously handle its marketing and credit operations, creating several new managerial positions which operated directly from the company's headquarters in Monrovia, California. In addition, founder David Blum's son-in-law, Terry Burman, who was a longtime employee of Barry's Jewelers, was named the company's new CEO. The new management team, which included people recruited from well-established businesses such as Gumps and Tiffany, was in charge of the marketing, merchandising, loss prevention techniques, and accounting for all the company's divisions, and had the aim of making Barry's Jewelers' operations more cost-effective across the board.

The company also placed a new emphasis on employee training: with home shopping networks taking an increasing number of customers away from traditional retailers, good, reliable customer service became one of the most important ways in which to attract and retain a solid consumer base. The company's new training program included workshops, weekly meetings, and video instruction for each of the company's divisions, giving Barry's Jewelers' employees a thorough and up-to-date knowledge of the products they were selling.

By the middle of the decade Barry's Jewelers was again making a profit, pulling in a revenue of $114 million in 1994, and by 1995 the company was operating 162 relatively profitable stores in 16 states. At this time the company began focusing on a new phenomenon which was sweeping through the retail industry: the increasing popularity of the superstore. Instead of opening new stores, the traditional method of expansion for chain retailers, Barry's Jewelers concentrated on converting some of its more successful locations into superstores. A superstore carried 50 to 60 percent more inventory than a typical jewelry boutique, and offered the customer a broader selection of high fashion jewelry. Superstores also competed directly with discount chains and home shopping networks, emphasizing value and quantity as well as customer service.

Though Barry's Jewelers by 1995 had constructed ambitious plans for growth and increased profitability, with intentions to open 21 new stores and convert more of their existing boutiques into lucrative, competitive superstores, the company was again ailing by the end of 1996. Even with a new $100 million line of credit from the Bank of Boston, the company found the competition from discount chains and other stores too intense, and, after another poor holiday season, had lost $6.8 million by 1997. Such a loss caused the company to default on some of its bank agreements as well as close 11 more stores.

In May 1997 Barry's Jewelers again filed for Chapter 11 protection, listing liabilities of over $134 million. Restructuring, both financial and organizational, was again in order: Randy McCullough, the former president of Silverman's Jewelers, became the company's new CEO and, after Barry's Jewelers emerged from bankruptcy later that year, board members made the decision to change the company's name to Samuels Jewelers. 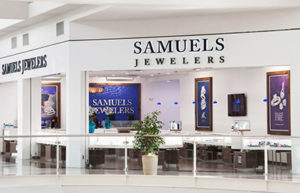 In 1999 things began to look up for Samuels Jewelers. The company had a better than expected Christmas season and also made its first acquisition since emerging from Chapter 11 in 1997. That year, Samuels bought the small but successful Silverman's Jewelers, of which McCullough used to be the president. Silverman's Jewelers operated 17 stores in nine states, and by acquiring the company Samuels Jewelers once again proved itself to be competitive within the jewelry industry. 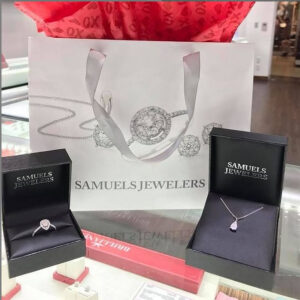